Hello to all my readers,

Have you ever wondered which school is classified as the best for success?

What is the real secret of successful people?

Have you ever thought how come most successful people seem to go from one success to another without obstacles?

‘The truth that makes men free is for the most part the truth which men prefer not to hear.‘ – Herbert Agar

We often associate certain names with the characteristic of excellence. David Beckham with football, Tim Berners-Lee who invented the World Wide Web and Pablo Picasso with art.

What if you had to name the genius of the 20th century?

Without a doubt, Albert Einstein would be nominated.

Although we know him as one of the smartest men ever born, at school he was average at best. He shunned certain classes for the mediocrity of education and mocked teachers who were irritated by his lack of obedience. His Greek grammar teacher, Joseph Degenhart, achieved immortality in the history books through insisting that ‘nothing would ever become of you.’ Later, when Einstein was told it would be best if he left the school, Degenhart explained, ‘Your presence in the class destroys the respect of the students.’ Disgusted by the rote teaching, Einstein quit high school at the age of fifteen. The rest is history.

This man of great scientific feats was also a man of noble heart and uncanny wisdom gained from the school of hard knocks. He often struggled to pay bills until the age of 26 when he wrote three papers that revolutionized our world.

Is it the type of school that defined a person’s charisma and intelligence?

What are Albert Einstein’s 7 lessons from the School of Hard Knocks that characterise  successful people?

Lesson # 1  Invest in the success of others.

In his famous essay, ‘The world as I see it’, Albert Einstein wrote: ‘A hundred times every day I remind myself that my inner and outer life are based on the labours of other men, living and dead, and that I must exert myself in order to give in the same measure as I have received and am still receiving…’

Those who succeed in life understand that success comes to those who make the conscious effort every day to give back to their family, friends and the community. When we invest our life energy into ensuring the success of others, our reciprocity encourages our own success. For example through blogging, I have found when I try to uplift others by sharing my experience and knowledge, I too receive positivity and connection from countless people who take the time to visit my blog and to comment on my articles.

‘Education is what remains after one has forgotten everything he learned in school.’- Albert Einstein

Albert Einstein’s dislike for conventional schooling never had any influence on his passion for learning. Throughout his life he passionately explored nature and its vastness to seek answers to mysteries that intrigued his mind. A life of solitude and self-study made him into the eminent scientist we recognise.

In our life we learn by meeting different people, by exploring our ideas to solve the common issues and by relentless desire to improve our way of life. Personally, I have learned many lessons of life after I left the school.

Lesson # 3  Your life is limited by the limits of your thoughts.

‘Logic will get you from A to B. Imagination will take you everywhere.’ – Albert Einstein

We are educated to consider life with logic. We learn how to get from A to B with merit but we equally abhor thoughts of charting our own course to get from A to B. We are taught to excel at knowledge that already exists. We are infused with the fear of self-doubt to even consider an alternative path.

History has shown that those who contributed the most to mankind were the ones who defied the accepted knowledge of the masses. They dared to imagine what was considered impossible at the time. For example, the 6th century BC Greek mathematician Pythagoras said that the Earth was round and in the 3rd century BC Greek astronomer Aristarchus said that the Earth revolved around the sun. In both cases their ideas were rejected as preposterous.

‘Life is really simple, but we insist on making it complicated.’
– Confucius

Lesson # 4  Simplify everything you do. 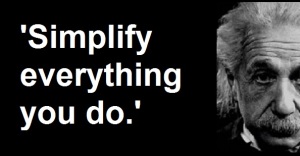 ‘If you can’t explain it simply, you don’t understand it well enough.’ – Albert Einstein

Life is simple and those who succeed definitely master the art of simplicity in everything that they passionately do. Warren Buffet was once asked why he hadn’t invested in Microsoft despite being a close friend of Bill Gates. He answered ‘I don’t invest if I don’t understand the underlying business.’ It’s a simple answer but one that Buffet adheres to and it has served him well.

James Michener, in his memoir, The World Is My Home, revealed the secret his work when he wrote: ‘Good writing…consists of trying to use ordinary words to achieve extraordinary results.’

All of our wisdom and knowledge dies a horrible death if we do not possess the deftness of expressing our knowledge in simple words to the rest of the world.

In his famous essay, ‘The world as I see it’, Albert Einstein wrote, ‘The trite objects of human efforts — possessions, outward success, luxury — have always seemed to me contemptible.’

One of the myths of our society is that ‘more’ will make us ‘happier’. We invest our life energy to possess lifeless possessions. We are educated to foster consumption with the mantra of – ‘The more, the better.’ We are educated to have a great job. A great job requires luxuries to fulfill our outlandish desire to impress others. Before we realize it, we mortgage our freedom to the possessions that bring more sorrow and inner grief in a vain hope to show off to the masses. A life of happiness and inner peace rests upon the virtue of simplicity.

Seldom do schools teach or promote the value of living a simple life or the value of living within our means. The current subprime mortgage crisis is a wakeup call for all of us. It is madness to accumulate more possessions when we cannot afford them in the vain hope that they will make us happy.  It becomes an endless loop of self-pity. Feeling part of something greater than ourselves and having what we need brings a life of contentment.

‘It’s not that I’m so smart, it’s just that I stay with problems longer.’ – Albert Einstein

Our conventional education rewards those who succeed in exhibiting their knowledge of books. Students with the ability to memorise rather than the power of creativity are rewarded for their stupendous bookish knowledge. Our dislike of failure comes from the years of schooling that abhors failure. It’s the fear of failure that limits our thoughts and restricts our imagination. Albert Einstein’s passion for physics and his dislike for conventional schooling allowed him to become the greatest scientist of the 20th century. History has countless examples of people who never ceased to imagine, question and discover what intrigued their minds. Success comes to those in abundance who dare to imagine and find solutions that would benefit mankind. These brave people understand the value of failure to gain knowledge that can lead to the peaks of success.

Lesson # 7  We are creatures of our values and character.

Every bookstore carries a plethora of books on success and we flock to seminars that promise and sell instant success themes to our insecure minds. Our culture adores instant success to such an extent that thoughts of failure or the fact that achieving your goal will take time, shake even the strongest will. The reality is a far cry from our fake belief. There will be obstacles and failures along the way but we must bounce back from the lows. In today’s world, the ‘get rich quick’ mantra shuns the virtues of value and character. We all know that a man without values and character is doomed to fail miserably in life.

‘I have never looked upon ease and happiness as ends in themselves — this critical basis I call the ideal of a pigsty. The ideals that have lighted my way, and time after time have given me new courage to face life cheerfully, have been Kindness, Beauty, and Truth.’
~Albert Einstein

So, from the school of hard knocks, Albert Einstein taught us to work selflessly for others, to never stop growing our minds, to love our imagination, to make our thoughts simple enough for others to understand, to live a life of simplicity, to never quit no matter what it takes to succeed and above all, live a life of the highest values and character.

Are you a graduate of Einstein’s school of hard knocks?

Remember, success is not a straight line, it has curves, valleys and peaks to climb but at the end, it will be worth it!

‘Achieving goals by themselves will never make us happy in the long term; it’s who you will become, as you overcome the obstacles necessary to achieve your goals that can give you the deepest and most long lasting sense of fulfillment.‘ – A. Robbins

Double Winner Awards Author of ‘The book on Success‘

Personal Trainer from Swansea, Tara Hammett gives you her fab tips on everything fitness, nutrition & motivation!

Taking yourself to the next level

Personal Trainer from Swansea, Tara Hammett gives you her fab tips on everything fitness, nutrition & motivation!

Taking yourself to the next level